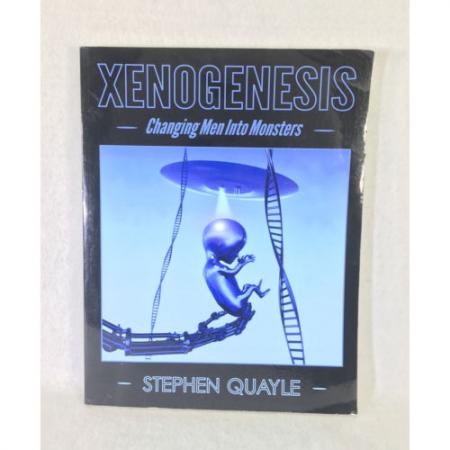 Condition: This Book is in Good Condition. Light wear on edges, corners and cover. Binding is solid and square. No highlighting/notes,

A Future of Unimaginable Horrors …created for our planet by unseen masters Xenogenesis reveals a future of terror that will soon face human beings. Monsterous creations are being developed with secret technology in labs around the world. Xenogenesis is the production of an offspring entirely different from either of the parents, transformed though the addition of DNA from an alien or animal to the normal genetics of a human being. The results will be comic book super-heroes come to life, living creatures with mythical abilities unlike anything mankind has seen for thousands of years, and with inspired the ancient legends of gods and goddesses. This horrifying future targets God’s original creation for corruption. Evil forces hope to use fallen angel technology to shift the balance of power from God and mankind to Satan and his followers; monsters will soon be presented as our saviours, with hollow promises of eternal life without the need of God or morality. Even now, these seducing spirits are guiding and tricking mankind to unwittingly commit genetic suicide. The replacement race stands poised to bring about the total annihilation of the human race. This book offers hope. There is a way to avoid the dangers and ultimately save mankind from this hell on Earth that evil powers have devised. There is a true Savior, Jesus, who waits silently and patiently to rescue human beings from this most perilous time in history. This book will reveal how you and your loved ones can find the way to avoid the dangers our planet now faces.

There are no reviews yet.

This site uses Akismet to reduce spam. Learn how your comment data is processed.