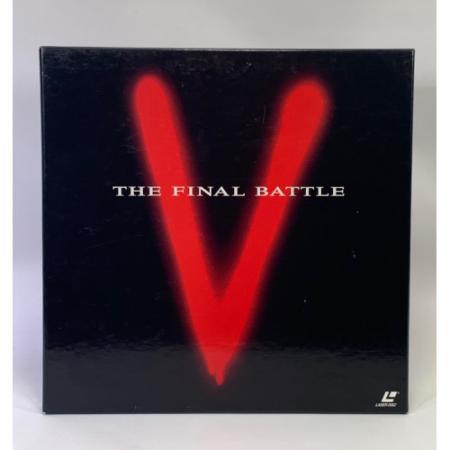 The epic television miniseries comes to an explosive conclusion as a motley force of humans makes a final stand against the reptilian visitors who intend to harvest them as food and use the earth as a giant water cooler.

You are buying a V: sci-fi  3 disc box set. Each disc contains two sides of movie content. Warner Bros production V was just as much a phenomenon in Japan as it had been in the United States. Because the Laserdisc market was stronger in that country, Warner Home Video had released a couple of elaborate V packages on LD much earlier there, in 1988 and 1989.

The first, simply called V, actually contained both the original miniseries and The Final Battle in a five-disc box. To be honest, the front cover artwork is kind of a lazy mess that just splays a handful of promotional poster designs in boxes around the central logo.

There are no reviews yet.

Be the first to review “V: The Final Battle (Laserdisc, 1999)” Cancel reply

This site uses Akismet to reduce spam. Learn how your comment data is processed.

Add to Wishlist
Quick View
Out of stock

The Weepies, Say I Am You, CD